As explained in this link, "This is a grave from the Victorian age when a fear of zombies and vampires was prevalent. The cage was intended to trap the undead just in case the corpse reanimated."﻿
Posted by Linda Mooney at 8:20 AM No comments: 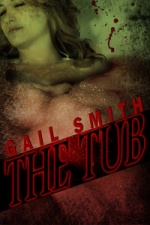 Amanda Storey has been sent to Itsy to convince the town a Ritecost store is just what they need.

This story opens quickly and the author does a great job at offering the ‘something’s creepy’ about Itsy that all good horror stories require. You know something bad will befall Amanda, and you feel more uneasy as the story progresses. By the time she arrives at the bed and breakfast you know she’s not checking out, but what exactly will happen to her? The author made it so entertaining that I wanted to read on. Her demise is the erotic part of this story, and there’s no man involved so it might not be for die hard romance fans. The dialogue is natural sounding, sometimes witty and the characters well drawn.

Out in the Alaskan tundra, a scientific study uncovers the remains of a wooly mammoth. But as the beast begins to thaw, so do the tiny prehistoric bugs that were hibernating within it.  Before too long, the camp is infected, and that's just the first ten minutes of the film.

A group of students from a university are sent to the campsite, including the daughter of one of the scientists. Because he's out of commission, the students have no clue as to why the camp is deserted. It isn't long until the bugs are coming for them.

The only known name in this flick is Val Kilmer, but to me he turned in a wooden performance. However, the supporting cast did an outstanding job. The effects are great, and the makeup is terrific, even if the gore is in short supply. The movie held my interest, but I had to give it another demerit for tacking on a worn out trope ending.

Still, my recommendation, if you need a Saturday afternoon no-brainer, is that you

Posted by Linda Mooney at 8:25 AM No comments:

This is One Teddy Bear You DON'T Want to Give to Your Children! 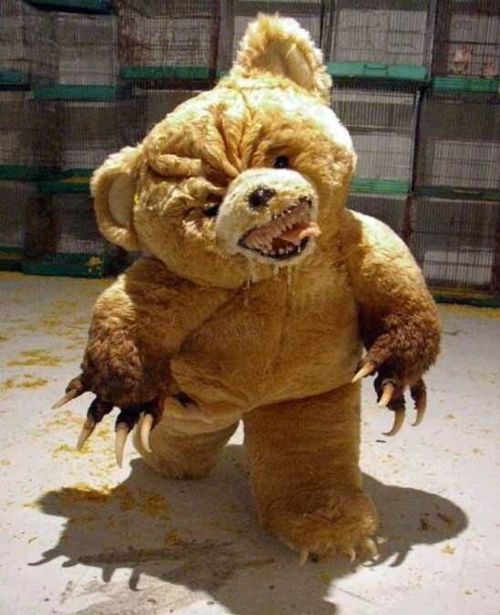 I don't know if this is a movie still. If you can identify it, please let me know. Thanks!
Posted by Linda Mooney at 7:56 AM No comments:

You Don't Need a Green Thumb. You Need a Decomposing One.

Add blood, and you can grow your own!
Found here.


(Wonder what the neighbors would say if they found this sitting on your front porch?)
Posted by Linda Mooney at 8:55 AM No comments:

It's an apocalyptic future. Something has shut down all power so that it can attack in the dark. Attack and consume.

Five people find each other after thinking they're the only ones left alive on earth. But the enemy is ruthless, and it's just a matter of time before there'll be no one left.

This film is chock full of known names, and their skillful delivery and acting is why the film worked for me. It's relentless, and you know there's no possible way it can have a happy ending. (Face it. Horror movies aren't known for them.)

There is gore, but it's the overwhelming sense of defeat that keeps you watching. Waiting. Anticipating.


And that means my recommendation is
Posted by Linda Mooney at 8:39 AM No comments:

Why, no, officer. I was nowhere near the crime scene. Why do you ask?

Found here at Kaboodle.
Posted by Linda Mooney at 6:21 AM No comments:

But it does remind me of my story THE TUB.
Posted by Linda Mooney at 8:59 AM No comments:


If you're thinking this flick is anything like "The Bad Seed" or "Village of the Damned", you're not too far off. But this film feels more realistic. The spontaneous reactions by the children don't seem overly dramatic, or give you the impression they're being manipulated by some invisible force. And for that reason alone I found myself drawn into the story.

The Children in question are brothers, sisters, and cousins. Their mothers are sisters. Younger sister's family has gone to older sister's family's home for the New Year's holiday, and for a while everything that happens is what every family get-together experiences. Soon the children begin to feel illness, throwing up and not wanting to eat. After that, the "accidents" begin to occur. You never find out what caused the children's behavior to change, and I like that. It keeps you guessing and wondering if the infection is going to spread, and with whom.

There is a moderate amount of gore, but this film is more relentless when it comes to the psychological drama. Which is why my recommendation is that you

Posted by Linda Mooney at 8:40 AM No comments:

In Case You've Ever Wondered...

This is what a child's skull looks like when it prepares to lose its baby teeth.
Both gruesome and remarkable, right?  Found here.
Posted by Linda Mooney at 9:53 AM No comments:

Need a Place Holder For Your Current Tome?

Need a unique bookmark to help you keep your place? Check out this really cool bloody reminder from ThinkGeek.  I guarantee no one else will touch your book.
Posted by Linda Mooney at 7:15 AM No comments:

Hope you have a bloody good holiday!
Posted by Linda Mooney at 8:51 AM No comments:

I was flipping through my cable guide and found this channel.  Right now it shows reruns of "Monsters", "Buffy the Vampire Slayer, "Twilight Zone", "Tales From the Darkside", and "Outer Limits", as well as horror movies.  They have a website and a blog, and I've noticed they'll be highlighting the Masters of Horror series in July.

Check them out!
Posted by Linda Mooney at 7:17 AM No comments: